Yesterday on June 16, 2015, the NC House of Representatives had a very lively and lengthy debate regarding HB 562 amendments.  To the credit of all involved the result was the passage of good common sense revisions to HB 562 that will maintain the current background checks for hand gun purchases through gun fairs and on the internet.   Thank you to Representative McNeil for proposing this amendment that will help keep the citizens of North Carolina safe (see picture below of man with grey mustache and an empty seat in front of him that belongs to Rep. Rick Caitlin).  Another victory was the passage of an amendment to place severe restrictions on hand gun purchases for those arrested for stalking and domestic violence.  Many thanks to Representative Turner for proposing this amendment.  And, finally, this session agreed to an amendment not allowing hand guns in the General Assembly chambers.  A very rewarding and inspirational day for those of us fighting hard to prevent gun violence.

The debate that accompanied these votes was extremely interesting and provided arguments from all sides.  In the end, common sense won out and the majority voted for a safer North Carolina through good common sense legislation.  A big thank you for the hard work done by all of the gun violence prevention groups participating in fighting against the original version of HB 562 with a particular thanks to MomsRising, Moms Demand Action for Gun Sense in America (see picture below of Sara Green, North Carolina Chair) and North Carolinians Against Gun Violence.  Your voices have been heard and I thank you.

The only disappointment I had yesterday was the absence of my very own representative Rick Caitlin for all of the votes on the amendments to HB 562.  He made me feel like I had no representation at all on such an important bill.  He was there earlier and left when the HB 562 discussions began.  Why?  Personal emergency, maybe.  It appeared he was just running from having to place his vote.  Again, why?  He certainly received many calls requesting that he not support the original version of HB 562.  Can he not represent us even if he does not agree personally?  Very sad.  I want someone to actively represent me if he is an elected official to such an important office. 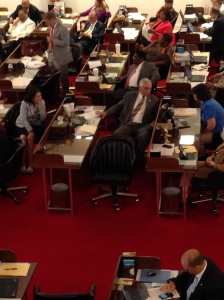 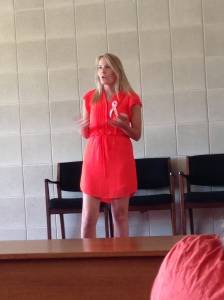